by The Neil Campbell Collective 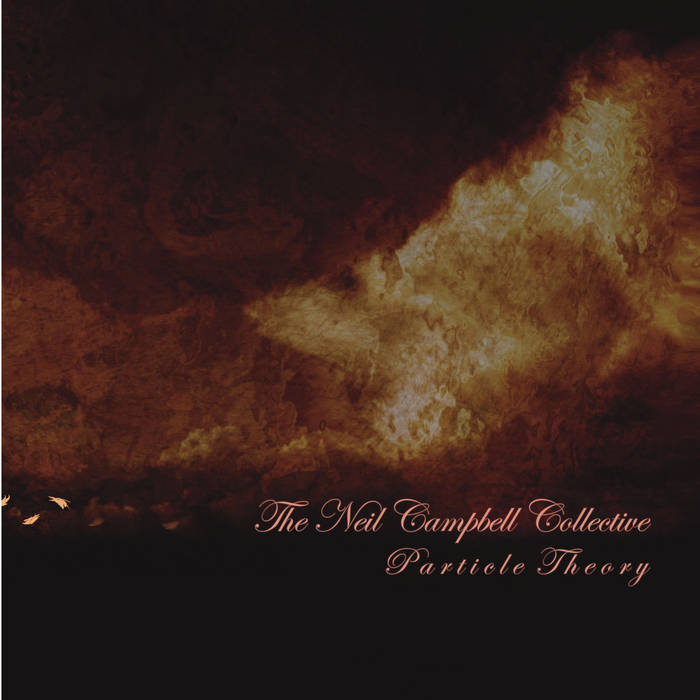 Peter Critchley This is a brilliantly conceived and executed piece of music. There are some storming rock instrumentals here, fusion, ambitious and brilliantly executed pieces, electronica and wonderful piano and acoustic work. The album characterises the essence of progressive music perfectly - imaginative, daring, subtle.
This is an album of music of the highest quality. It's beyond genre. You are simply listening to music of imagination, inspiration, meaning, excitement, elegance and beauty. Favorite track: The Line.

Following the release of '3 O'Clock Sky' the Liverpool (UK) based band The Neil Campbell Collective started to radically develop their sound and began work on their second album ‘Particle Theory’ (2008) with a much more experimental approach.

Around a year in the making, ‘Particle Theory’, whilst remaining eminently melodic and filled with sumptuous rhythmic, textural and harmonic arrangements, almost completely abandoned any vestige of conventional song forms. Across the length of the album a small handful of themes are presented, layered and hyper-arranged in an array of wildly diverging contexts, demonstrating an amalgam of styles and references from progressive, post-minimal and ambient music.

"...The Liverpool band prove that three-minute pop ditties is not all that comes out of the 2008 European Capital of Culture. Cleverly layered sounds and atmospheres collide to keep the listeners attention as the Camelesque meets Cantebury scene head on. This album leaves the musician's to put themselves in a unique rock shop window and you just know the guys do this for the love because it is just too damn clever for the mainstream", Martin Hudson, Classic Rock Society

"... more fine and melodically pronounced material, ... a crossover between true progressive rock and intelligent pop music with a certain acoustic as well as some chamber quality to it which, this time around is often joined by elements of classical Minimalist music .... this is accessible, yet elegant, warm, deeply beautiful and tasty music, 5/6 stars ..." Vitaly Menshikov, Progressor.net

"[Particle Theory] dissolves the conceptions of time and space with its instrumental richness and sumptuous compositions, and it is a delight of sounds and intense moods that will consume one’s musical imagination for many listens", Alex Jasperse, Muse's Muse

"If you're looking for a "progressive" album, in the finest sense of the word, go straight to Particle Theory....Neil Campbell and colleagues give life to a carefully thought out and deep progressive style which impresses straight away and continues to impress the more you listen to it.", (translated by Paul Vaughan from the French) - www.cosmosmusic.fr/nouveautes.html

"This music is like a film, sounds flow into your head like pictures, captivating, and then reveal an abyss in all, mostly instrumental songs, in which to lose yourself. ..An exiting album, full of surprises and intelligently set arrangements. Not Prog, but Progressive Rock” , (translated from the German by Michael Beiert) - www.ragazzi-music.de/neilcampbellcollective08.html

"Musically, this stuff is all over the map and right from the start, I was impressed here. ....This is some very interesting and inventive music that is derivative of practically nothing at all. Excellent production effects and a unique approach to the overall delivery of the music make this a truly progressive release... ", www.progressiveears.com

"This is definitely progressive rock, but it's very fresh and very uncontrived and unconventional sounding. The classical-style guitar and cello are especially prominent and define the over-all sound. Some really great, moody melodies are explored. I was VERY impressed. You will be too.', Steve Feigenbaum, Wayside Music

"...a dense and complex suite of music that constantly challenges your perception of how music should be. With imaginative arrangements and some imaginative use of instrumentation (aided by Nicole Collarbone on cello, Mark Brocklesby on drums and percussion, Dan Owens and Liam Carey on bass, Stan Ambrose on Celtic Harp and Alex Welford on horns), Mr Campbell has certainly created a constantly challenging musical experience.', Stuart Hamilton, space-rock.co.uk

"...a very high level of creativity in the music. Add to that excellent performances, very good production and you get an album you will want to listen to quite often. When Particle Theory's last track ended, my reaction was "What... already over?". It did not take me long to put it back on again because Particle Theory merits numerous listenings. This very much unexpected gem gets my highest recommendation indeed.", Prognosis at www.silverdb.com

""Particle Theory" recalls both the symphonic folk music of Mike Oldfield and the large ensemble work of Ian Carr but also has obvious ties to the 'prog' scene with hints at Camel and King Crimson in a few places. Having done the necessary name-dropping I must say that this disc does a remarkably good job of not sounding like anyone in particular...The music is fresh, original and highly enjoyable! "Particle Theory" gets my highest recommendation!!", ZNR Records (www.znrcds.com)

"The Liverpool Collective has produced a real masterwork. After the 42 minutes is over one sits in front of the speakers and wonders in silence – “What? Over already?” – but then there is always the repeat button which this reviewer used a hell of a lot when reviewing this CD. Aside from being a talented multi-instrumentalist Neil Campbell is an accomplished songwriter and arranger who understands how to translate his personal mental cinema into sublime listening experiences. Without a warming up phase the Neil Campbell Collective plays straight to the heart of the listener and this reviewer is putting himself into the queue for their next album awarding 8/10 for ‘Particle Theory’.", www.rocktimes.de (translated from the German by Andy Fernihough)

"‘Particle Theory’ is a very beautiful guitar and cello coloured album. But also there are synth elements. The pieces present a mix of Progressive Rock, Symphonic/Melodic Rock, Electronica, Folk and Acoustic music. Above all the combination of whooshing bubbly synths (like the Berlin School or Ozric Tentacles) with these instruments has a special quality which I like very much. [It is] is a very varied album with lots of acoustic guitar, synths and cello that in itself works very naturally. You can listen relaxed because the melodies and sounds sink into the ears very smoothly. I like this album a lot.", www.musikzirkus-magazin.de (translated from the German by Andy Fernihough)

"Bands such as the NCC with an original style are not as easy to describe as bands who sound like so-and-so. The first thing that is apparent is that these are musicians with classical training. At times the NCC sound like a chamber orchestra playing rock, more rock-oriented than Karda Estra, more melodic and warm than Univers Zero. While they don’t strongly resemble any of the 1970’s progressive bands, the NCC share the same true progressive ethos and the same desire to incorporate several centuries of western musical development into rock.", www.kinesiscd.com

"...eight songs that perfectly blend together all the best elements of progressive rock., folk and even classical music, with traces of experimental electronics, to offer what is arguably one of the most diverse musical productions of the year. If you've never heard of Neil Campbell or his collective of musicians then Particle Theory is a perfect place to start. 4+1/2 stars", Ryan Sparks, Sea of Tranquility (www.seaoftranquility.org)

"....This is a very unique sounding album which holds your attention from start to finish. It does have some references and suggestions of other musical influences here and there if you want to spend time looking for them, but they just serve to allow you into the musical delights contained within this thoroughly enjoyable album.", Kevin Wallbank at psychedeliccentral.com

"I found this to be one of the most enjoyable new releases of 2008. With each listen it becomes a classic in my opinion due to the innovative sounds Neil and company create. I found each song on this album to be fantastic and I never grow tired of any of them especially the two part title track. If you‘re not convinced, I would suggest checking out the tracks on their MySpace page. Particle Theory is highly recommended and should be on many (hopefully) people’s top releases of 2008!", Ron Fuchs, ProgNaut

Art and Design by Michael Smethurst

Thanks to all the musicians and artists who participated in this project. Thanks also to Chris and Steve at Rooftop Studios and Mark and John at Crash.